Thanks to everyone who attended our
​2022 bull sale

Here's a highlight reel of the day ...
What a crowd! What a sale!
It was a freezing day with strong wind and off & on rain, but what a result!

An almost perfect sale. An incredible av at $11833 with more bulls catalogued and sold than ever before, yet a whopping 36 bulls sold for only $5000-$8000, with the most popular comment of the day "the bulls were of such high quality, I can't believe we got what we wanted and spent less than we intended".

For us as breeders, this is fantastic that such value was available. Everyone who wanted a bull and with any budget was able to get one.

An estimated crowd of 350+ travelling from all parts had the enlarged shed heaving. The support of fellow stud breeders got the sale off to a flier and we are very humbled that 6 stud programs chose to get their next sire from Taimate.
​
Thank you all again so very much, all the best for the season ahead and we look forward to following up as the bulls settle in to their new homes.

We guarantee all 2yo bulls sold at Taimate for a full 3 years for fertility and structural soundness.

The Taimate Angus Breeding Philosophy is based around the needs and wants of the commercial farmer. That is producing a bull who arrives at his new home, looking the same as he did in the sale, who then does his job over all of the females he is put with. He regains condition quickly, his off spring are born easily and survive with good growth rates through to weaning and beyond. Breeding a cow that is quiet, fertile, easy doing and long lasting. He is a bull the farmer can depend on for several years.

By having this clear, yet simple philosophy, we never forget our clients and doing right by them, is the most important part of our Angus Stud.

At Taimate we keep things simple. Most breeding is done naturally, with very limited use of Artificial Insemination (AI). When using AI generally only one or two sires are used per year. We firmly believe that this policy produces consistency and gives us our very good, even lines of cattle.

We often hear commercial and stud farmers saying they are sick of going to bull sales and never seeing two bulls the same. If there is one compliment we never get tired of hearing is that year after year the Taimate bulls look like “peas in a pod”.

In the past, we have placed a very strong emphasis on using mostly only New Zealand bloodlines. Whilst we are extremely mindful of using blood thats proven in NZ, we don't burry our heads and think that there's nothing else out there. We carefully select animals that will enhance our programme. Whilst, not everyone is a winner, with judicious use of new blood we are making even further gains forward in our breeding.
We emphasise an animal that produces deep, thickset, QUIET, well muscled animals that don’t break down. All of the attributes of the original Aberdeen Angus that came to New Zealand.

The Taimate cattle are often referred to as “Very traditional type cattle”. We take this as a huge compliment, as it has only been in modern times that the Angus has been letting itself down. Most particularly in bull reliability.

All Taimate cows MUST calve every year! No commercial operation can afford to run dry cows, so why do studs do it? We believe there is no reason why a cow should not be producing a minimum of ten calves in her lifetime. At Taimate we have a strict 40 day mating period, this certainly sorts out any poor fertility bloodlines.

Cow longevity is directly linked to bull reliability, which is sadly been lacking in Angus Bulls in recent times in New Zealand. There is no such trouble with Taimate bulls.

Our policy of feeding the animals what the season gives, with no irrigation or hard feeding allows the stock to grow out naturally. This combined with traditional type animals, genetics and good stockmanship leaves the bulls with the constitution to adjust to just about any farm environment.

Bull sales have continued to grow, with now 70+ 2yr old bulls being catalogued. Our last few annual sales have been exceptionally strong. In 2017 48/48 bulls selling for $9400 av, 2018 55/55 bulls selling for $9800 av, 2019 65/65 for $13892 av, 2020 68/70 for $10,000 av. These sales have been particularly pleasing as other than 2019, there have been no high price individual bulls to boost the overall average, just consistently good bulls throughout the catalogues, all selling for similar money. This is what we strive for- consistency. We are very proud to boast that we believe we have the highest % of bulls born to that being sold as 2yo across NZ. This showing our true consistency of breeding across our entire herd.

FOUNDING OF THE TAIMATE ANGUS STUD 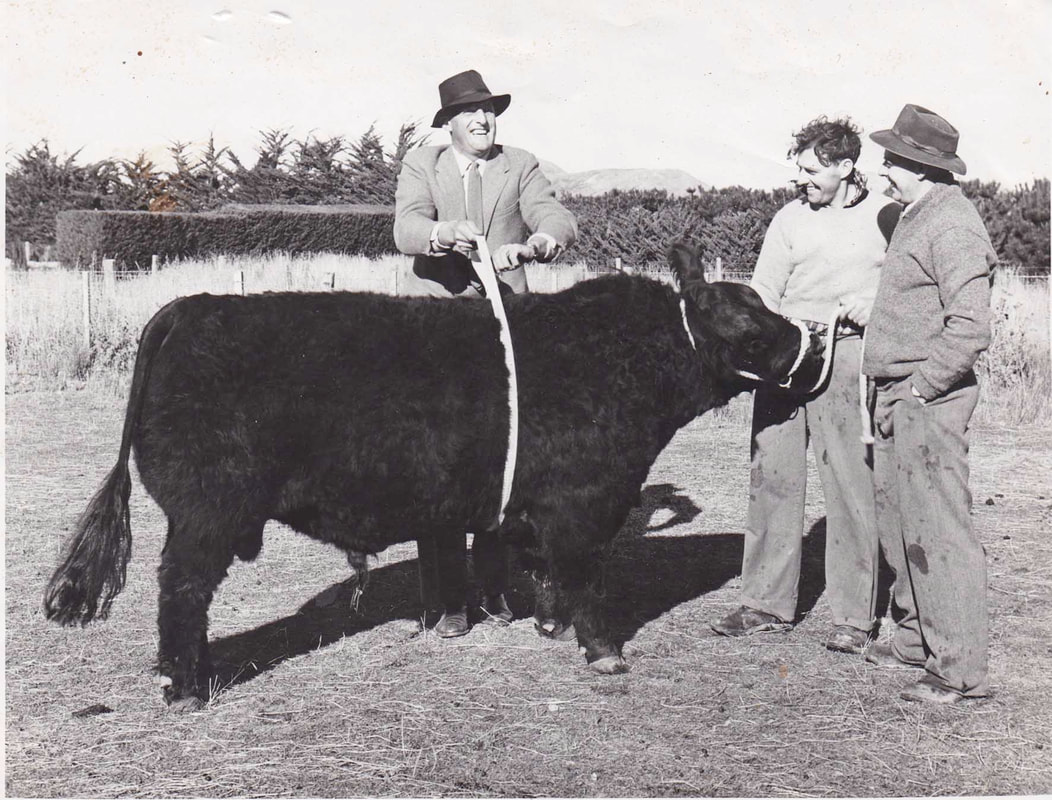 Jack and Tom Hickman founded the Taimate Stud on an extremely good stockman’s eye, based on constitution, reliability and survivability. Females MUST get in calf, no matter what the season, and produce an animal, bull or heifer, that shifts to all climates and situations.

Jack was never keen on North American bloodlines, and it was not until Ossie took over the management of the herd in the 1980’s that some North American bloodlines were introduced to a very limited degree. We have been very strict with the use of the larger North American bloodlines over the more traditional N.Z. / Scottish females, to ensure we keep our NZ attributes of meaty, tough, structurally strong hardy and do-ability proven on steep country cattle. This has given our herd well fleshed perfectly framed cattle with thick set early finishing progeny. Structural integrity has always been paramount, hence the judicious use of American blood as much of this that has come to NZ has had big structural and docility issues.